Today NNUH marks the start of Organ Donor Week 2020 by paying tribute to all the people who have made organ donations in the last year. 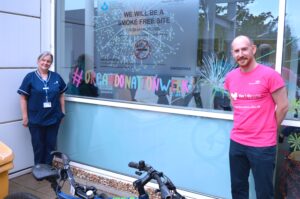 In the last 12 months NNUH has had 22 donors who have given 57 organs – information which is shared in innovative artwork by Eloise O’Hare, which is on display on the windows in the East atrium of the Norfolk and Norwich University Hospitals.

Medical director Professor Erika Denton said: “We are always grateful to the families and loved ones of donors who, through their immense generosity give another family a new chance at life.

“Here at NNUH we recognise how important the change in the law is in asking people to opt out rather than in, however it is important that families and loved ones know about the wishes of their loved ones, so we urge them to talk about organ donation, perhaps in less difficult times.”

A sentiment echoed by donor recipient Tim Edwards who has had two kidney transplants; one in 2009 and the second in 2017.

Tim, 40, who works as a Radiology Quality Assurance Practitioner at the Norfolk and Norwich Hospital, said: “Every year I have an anniversary – a really positive anniversary for me, but with that I also recognise that there are two other families out there for whom it is not so positive. I thank them every year for this fantastic opportunity they have given me.

He added: ““It is so important to have those conversations with your loved-ones, the law has very recently changed and whilst I know that not everybody will consider organ donation after death for various reasons, I think that people who feel strongly on this are more likely to follow up the process to ‘opt out’ than people who have every intention of donating but don’t ever ‘get around to’ signing the register. This would hopefully help to highlight some of the cases where families weren’t aware of their relative’s wishes.”

“I am incredibly grateful to the donors and their families, who helped me. The family has the final say, so it is so important for families and friends to have these conversations; to know what people’s wishes are. It’s all very well having a donor card in your wallet your whole life, but if your family are not aware of your feelings, sometimes the process can be halted resulting in the donation not going ahead.”

“I was a little apprehensive about returning to work to be honest, but at the same time it is a relief to be back. I was able to continue working whilst at home and therefore have some structure to my day but I recognise how difficult this has been for some people.”

Tim, who has worked for the Norfolk and Norwich Hospitals radiology department for 21 years, returned to work after spending nearly six months shielding at home. He was able to work from home and rely on his family to do his shopping for him. 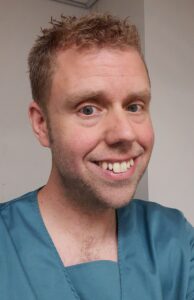 Doctors discovered Tim had problems with his kidneys when he was 15 years old. A visit to the GP on an unrelated issue led to a range of tests being carried out. He was referred to the hospital for more tests and a scan revealed he had renal failure.

Tim was monitored for a number of years, having been told the likelihood was that he would one day need dialysis and a kidney transplant.

He began dialysis when he was 25 and due to the rarity of the type of kidney he needed Tim waited for five years before he had his first transplant. He received it just before his 30th birthday.

Again he was monitored and after three years his body began to reject the kidney and he was put back on dialysis and the waiting list for a new kidney.

His second transplant came at Easter 2017 – 10 months after returning to dialysis.

He continues to be monitored and will take anti-rejection drugs for the rest of his life.

He said: “I am grateful to the donors and their families, who helped me. The family has the final say, so it is so important for families and friends to have these conversations; to know what people’s wishes are. It’s all very well having a donor card in your wallet for 30 years, but if your family is not aware of it they may be surprised and not approve of it.”

Eloise is a Norfolk artist and volunteer at the hospital, helping the estates team to install artwork.

During the Covid-19 pandemic she started an online art school teaching people to draw on windows as they did not have access to art materials. The school grew to include some 160 people from all over the world.