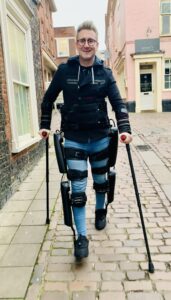 A Norfolk man, who became the first paralysed man to walk the London Marathon, has embarked on a new challenge to raise money for the Norfolk and Norwich Hospitals Charity.

Simon Kindleysides, 35, from Blofield, has set himself a goal to walk four miles every day of February wearing a specially-made exoskeleton suit.

The batteries in his suit will allow Simon to travel four miles before they need recharging and each four-mile leg will take him three-and-a-half hours to complete.

He said: “I was sitting at home doing nothing and I just wanted to do something to support the NHS and in particular, the teams at the NNUH, and I will be walking various four-mile routes through Norwich during the month.

“This lockdown is driving everyone crazy, mentally and physically so I wanted to push myself again.”

During wet weather Simon will be calling on members of his bubble to accompany him with an umbrella.

Simon was a dancer and a restaurant manager but in 2013 was diagnosed with a brain tumour and functional neurological disorder that left him paralysed from the waist down.

He is hoping to raise more than £2,000 for the N&N Hospitals Charity during his February Challenge which will involve 8,000 steps each day and a total of 224,000 across the month.

Louise Cook, Head of Fundraising, said: “This is such an incredible challenge and we are delighted that Simon has chosen to support his local hospital charity. We look forward to hearing Simon’s updates which and we hope everyone will support him.”

You can donate to Simon’s challenge page here https://www.gofundme.com/f/walkingforthenhs

You can find out more about the N&N Hospitals Charity by visiting www.nnuhcharity.org.uk