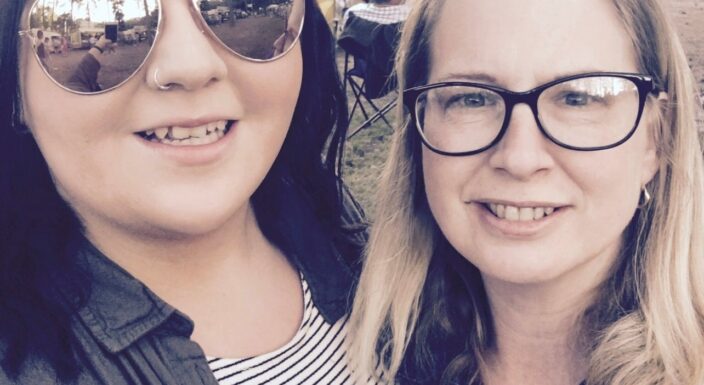 In 2013 Abigail Wallace, only 17 at the time, suffered from Bacterial Meningitis. Nine years later, she shared her story with us via Facebook.

Her mum, Alison, found her unconscious on the sofa after she felt very poorly over the weekend.

She was rushed by ambulance to Critical Care to receive ventilation and to be put on a life support.

“I remained in a coma for a week and after several exams I was diagnosed with Pneumococcal Bacterial Meningitis,” said Abigail.

“I was 17 and terrified and I remember the amazing support everyone at the hospital offered me.

“I was sobbing not knowing where I was or how long I had been on the ward; I remember one of the nursing staff, Bethany Bristow, was comforting me and holding my hand all the time.

“She’d been told I love listening to the latest songs, so she even got a radio for me to listen to.”

While Abigail was still in a coma, her mum had a serious car accident and also had to be admitted into Critical Care.

She had to undergo numerous life-saving surgeries to her neck, sternum, ribs, hips and legs.

Sadly, Abigail’s grandad, who was in the car with her mum at the time of the accident, died at the scene.

“I was made aware of this only when I came out of the coma – it was shocking news, my heart rate went scarily high and I had to have an electrocardiogram throughout the night.

Abigail and her mum Alison still remember the names of the staff who looked after them.

From Dr Drew, who left his car at Foulsham water tower to jump on the ambulance and sedate Abiagil, to those working on Cringleford ward (Samantha Jones- Clarke, Abi Kirkcaldy, Amy Garande, Maureen Stone, Hayley Buckle and Simon Liji), and the doctors who cared for Alison, Mr Lennel Luchman and Mr Patel in Orthopaedics.

“I’ll be forever thankful for the care my mum and I received: I felt so safe and looked after.”