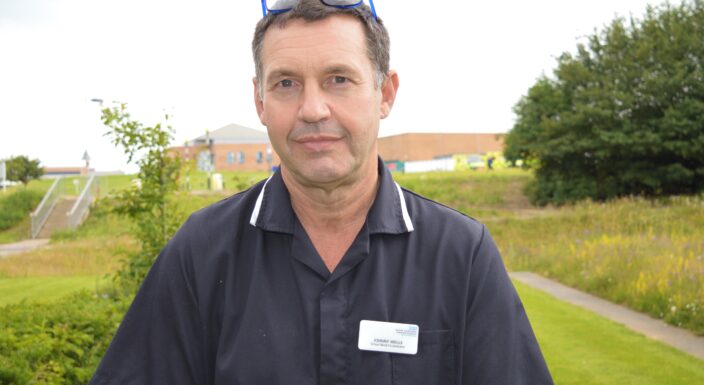 Johnny, who qualified as a Nurse in 1998 in Norwich, has always been an ED nurse.

His first job was in London at the Chelsea and Westminster Hospital, he also worked for 12 years at St George’s Hospital and was the ED Matron at Croydon University Hospital.

“I have always loved to work in ED, and this is an exciting time to join the team,” said Johnny.

“Since August, ED has become part of the Surgical Division to support our ambition of becoming a Major Trauma Centre

“We’re now working closer with the Trauma and Orthopaedics and Theatres teams to improve patient experience and flow”.

“However, issues with patients’ transition from ED to other areas of the hospital remain prominent.

“There’s a lot of pressure on ED and this is due to patients not flowing through the department as well as they should,” added Johnny.

“The answer is not necessarily increasing the space. Instead, we’re revamping our internal flow processes, working with our Admission Unit and the Discharge team, as well as the Site Operations team, to make them quicker and slicker.

“If we continue to aim to turn every patient around in no more than four hours, as per NHS national guideline, we could free up space for our expected four hundred people each day.”

ED is currently undergoing a revamp, with changes to space being created this month and the reception being moved. A new staff rest room and showers were unveiled last month.

“I’m also working to introduce more team-building opportunities and to protect study time for colleagues. I’m also re-organising the off-duty rota to make sure we don’t have days where we’re vulnerable with not many colleagues being at work.

“I have a very good team around me, everyone works really hard and the changes in the environment have already lifted up the morale”.