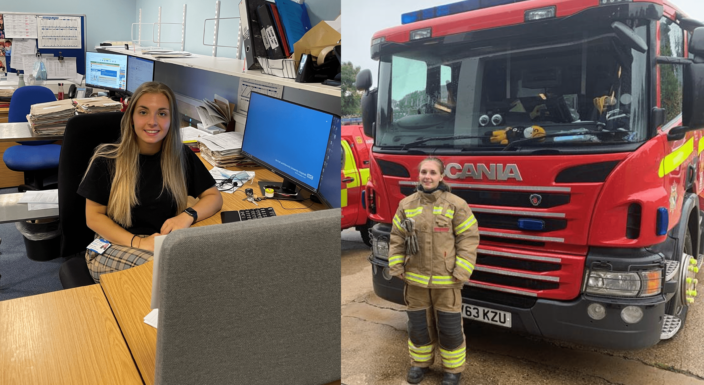 By day Megan Purdy is a full-time medical secretary, by night she is a retained firefighter.

“I have always wanted to work in some way with the emergency services and, living near the fire station, I often see the trucks go out and I really wanted to be involved. I love it,” said Megan.

After completing her year-long apprenticeship in 2019, Megan became a Medical Secretary at Cromer Hospital.

“I have been here nearly five years now. I fell into it really. I knew I wanted to help people and maybe work in the NHS, but wasn’t sure what that would be, so I fell into this really. I love it. I love my colleagues and the team I work with.”

After encouragement from members of the team and her line manager Carrie Moore, Megan signed up to be a fire fighter in October 2020. She has completed her initial fire service training and hopes to complete courses to improve her competency levels.

Megan heaped praise on the people around her, who support what she is doing. “I live with my partner, and he is really supportive. He knows I love it and he says he is proud of me and the team here are so supportive. They are flexible, and as long as I make up my hours and get the work done, they have no problem. It means I do some really long days. There is not a shout every night, so it means I do get some sleep’.

“With the recent hot weather and the heatwave, though, it has got a little busy. When my pager goes, I go. Those two days in July when it hit 42 degrees we had every single appliance out on a job. We had 17 different jobs in one day and 72 for the whole of July which was a new station record. Before that the record had been 52 callouts in a month, so we smashed it.”

And even with temperatures dipping a little this has not helped reduced the number of fires. Megan spent Monday and Tuesday at a ground fire in Salt House.

Megan added: “It’s a balancing act between the two and I love it. I am lucky that I am in a position to do both.”