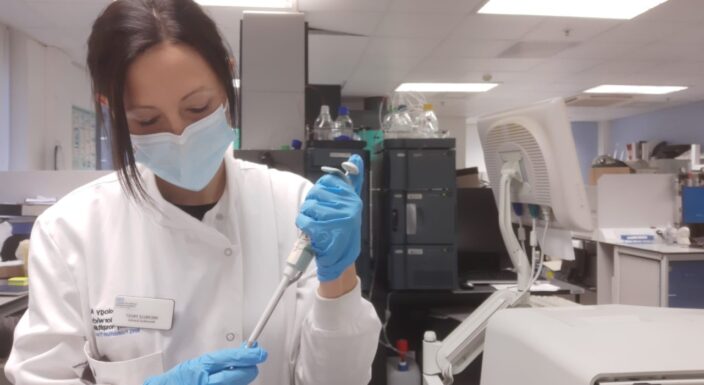 From photographer to Specialist Biomedical Scientist, Michelle Frost talks about the Anti-Spiking Campaign she created, which has taken her all the way to the House of Commons.

Michelle is in the middle of writing a 3,000-word report to the Home Affairs Select Committee on the Anti-Spiking Campaign she and her team launched just before Christmas.

Michelle and the lab team have joined forces with the police, the SOS Wellbeing bus, selected clubs and bars, and more recently the University of East Anglia (UEA) to offer anti-spiking kits to anyone who thinks they (or a friend) have been spiked. They can ask at the bar or in UEA dorms for a kit to provide a urine sample, which is submitted to our lab for testing.

Early signs are encouraging as the data seems to be backing up the claim that the campaign here in Norfolk has seen a reduction in the number of spiking incidents, while nationally the trend is increasing.

Michelle, 35, came up with the idea after a night out with a colleague when her drink “disappeared” within minutes of her arriving at a Norwich city centre venue, only for it to re-appear minutes later.

As a Biomedical Scientist and aware of the dangers of spiking, Michelle refused to drink her cocktail. But that was not the spark which ignited her idea to run a campaign.

“As I was leaving I asked the security team about spiking and they said it had been an issue years ago, less so now, and even if you did suspect you’d been spiked, you would never be able to find out.

“I thought: ‘well I could, because I have the privilege and technology to take a sample and run a test at work.’ This made me think that this test should be available to everyone and not just me because I happen to work in a hospital. If I could put a little test kit together then anyone thinking they had been spiked would be able to find out more.”

Last week Michelle was asked to give evidence at the Home Affairs Select Committee via Zoom as they launched an investigation into the issue.

“It was a great experience. It was just me and one lady and she asked loads of questions about each of my power point slides. She was really interested and said MPs find this a grey area, but if we can produce evidence and data then we can show that this is a real problem and we have a way to address this.

Since launching the campaign Michelle added: “I can’t believe the campaign has led to this. This sort of thing isn’t supposed to happen to people like me so I think this is a really good way to encourage other people who think they want to do something but lack confidence to have a go. I hope it inspires people to work hard to do something good for patient care as well.”

Michelle has had an unusual route to biochemistry having started her working career as a photographer. She has been a volunteer co-ordinator, worked in HR and Payroll for Redwings Horse Sanctuary charity, as well as stints in payroll and finance for different organisations outside the NHS.

But a chance at a career change came when her now nine-year-old son Harrison was three, and Michelle was working finance and pay roll for a charity preschool, and working evenings in the local pub.

“I could have just sat and drunk tea with my friends, but I had always had a real interest in science so I looked into doing a MSc. I did an online degree but that didn’t give me any actual lab experience, and I couldn’t even get an interview within the lab, so I started volunteering at the hospital. I eventually got a permanent job as a Band 4 Associate Practitioner, now I am a specialist Band 6.

“It’s all fitting together really well. And I hope this campaign makes a real difference. It has been really exciting. It is a hugely important campaign as we aim to learn more about spiking so we can better tackle it together.”

John FitzGerald, Lead Healthcare Scientist, said: “This is brilliant work that Michelle has been doing around the Anti-Spiking Campaign. I am so proud of her for the initiative she has taken in developing this idea and the team in supporting her. It is a great example of multi-agency working and should give young people in Norfolk some re-assurance when they have concerns of being spiked.”

Michelle is now waiting to hear if she is going to be invited to attend the Select Committee session in person. Meanwhile her kits are available at the UEA and in a growing number of clubs and bars in the city. Michelle hopes to be able to crunch the data in the coming three months.