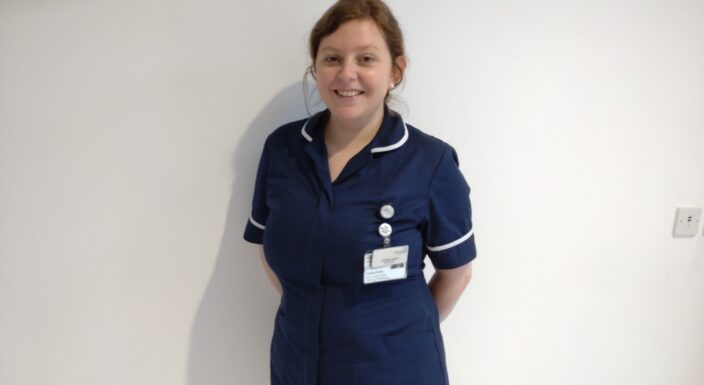 Phoebe Smith is our new Senior Clinical Educator in Trauma and Orthopaedics. Her mission since she has chosen to accept it is to develop a training and support programme for the new recruits who will be joining the Norfolk and Norwich Orthopaedic Centre as well as supporting new recruits and colleagues across the entire Orthopaedics specialty.

This is a new role, one which Phoebe will be able to develop, and she believes her own lived experience of career progression, development and support puts her in an ideal position to create training programmes, support packages and courses for continuous development so she can help create a first-rate team who will all work towards making our NaNOC and exemplar operation.

“I want everyone to want to work in NaNOC or in Orthopaedics,” said Phoebe. “I want people to see what we do here, and say: “Wow, look what they are doing with their staff; I want to work there,’ and come and seek out our vacancies. I want 10 applicants for each job.”

Phoebe started her career in 2015 as a Band 5 nurse in an older people’s Orthopaedic unit, which gave her the baseline training and experience of bedside care, before being transferred to an Orthopaedic ward for trauma and elective surgery. Urology was incorporated into this area which allowed Phoebe to expand her skills and surgical knowledge. She then completed a secondment on a Thoracic and Upper GI ward, which gave her experience of caring for very unwell and deteriorating patients.

Phoebe’s career continued to develop as she completed another secondment as a Deputy Ward Sister. This was her first leadership role with much more responsibility.

Phoebe said: “Unfortunately, then the pandemic hit. I volunteered to work in Critical Care, which was a steep learning curve for me, but again it meant I learned a huge amount and added to my skill set.”

After being stepped down, Phoebe returned to the ward, until completing a third secondment with the Orthopaedic Nurse Practitioner Team, which widened her clinical assessment skills, and holistic assessment of the Orthopaedic patient.

Her next role was a permanent one as Deputy Sister in Elective Orthopaedics, which led to her successfully applying for her current role.

But her development has not stopped there. Phoebe’s manager, Trauma and Orthopaedic Matron Cathryn Abbs-Rowe said: “Phoebe is currently on a training course in leadership course organised by Light House Training, to further develop her skills within management. With Phoebe’s development within the new role there will be an opportunity for her to undertake her Masters in Clinical Education.”

Phoebe said: “Orthopaedics is such a vast specialty, with lots of opportunities to try out many different areas, so I am looking for that rotational aspect. This is something which used to exist, and it would be great to see its return. I will also be looking to bring in formal, informal and ad hoc training sessions, to aid the upskilling of our staff.”

“I am a living example of what I want to put in place. My own experience has been incredible, and I have been supported by some amazing people who have genuinely wanted to see me succeed. I have had people come to me and tell me of opportunities and identify roles they think I should apply for. There is a real sense and desire to see people succeed, develop and progress. I want to be able to pass that on to new recruits and let them know that this is a place where they can thrive with great, genuine, real support. I want to see us promote from within because we have the very best.”