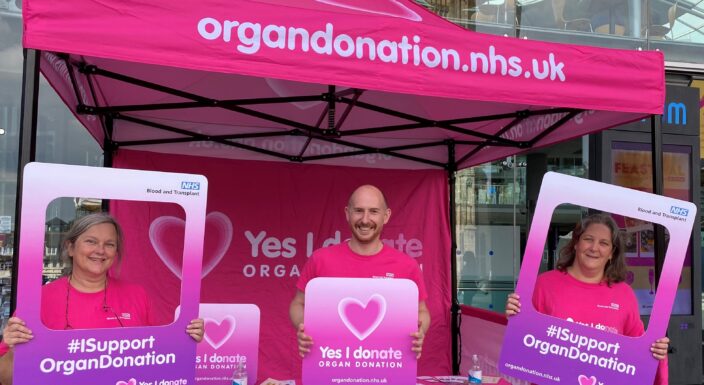 Herminio Astorga, Pogs to his family, suffered a cardiac arrest while on a video call with friends last September. He was resuscitated and taken to NNUH but sadly could not be saved – but he was able to save and improve the lives of three others by donating his kidneys and liver.

His wife Maida and daughter Katrina, both nurses here at NNUH, were grateful for the care and support from staff and the Specialist Nurses for Organ Donation.

Maida said she knew Herminio’s wishes were to donate his organs. “We had a bypassing conversation about organ donation but did not realise he signed up twice to be on the organ donor register,” she said. “It has been really fulfilling for our family to know that he saved another life and from our sadness something positive came from it. It has got our whole community talking about the issue which could go on to save further lives in the future.

“To know he is still continuing his life in a different person has eased the sadness and the loneliness. I always think about the recipients and I keep them in my prayers.”

Katrina added that it had made a huge difference to the family to receive a letter from one of the organ recipients telling of his gift’s life-changing impact.

“Dad loved to serve the community and was part of two Roman Catholic groups in Norwich, he was an avid musician and he loved to make jokes. He was the chef in the family and a great dad.

“I’m so grateful that we talked about organ donation as a family so it was a planned decision and was not a rushed one. We felt so supported by the Trust and the ambulance service and everyone has been amazing. We never felt we were alone and we were involved in all aspects of his care. They made sure it was mum’s decision and felt comfortable with the decision to donate his organs. It is incredible to see the change it has made.”

Nick Hext’s favourite subject is talking about his wife Joanne – not least because of the enormous impact she has had on five perfect strangers.

While she was alive, Joanne had chosen to be an organ donor before the law changed from having to opt in to having to opt out. In 2018, Nick was faced with the agonising decision of whether to go ahead with her wishes. While that was never in doubt in his mind, he needed to make sure the whole family was in agreement.

The family, including Joanne’s three sons, did agree and Joanne was able to help five families, having donated her lungs, liver, both kidneys and her heart in April 2018.

As we mark Organ Donor Awareness Week, Nick was keen to support the campaign to encourage families and potential donors to talk to each other while they can, to really understand each other’s point of view and to understand why someone wants to be a donor.

The law changed in May 2020, meaning patients had to opt out of organ donation rather than opt in, however families and next of kin still have the right to veto organ donation.

Nick, an organ recipient himself, said: “I knew it was important to Jo, but this had to be a family decision. I didn’t want any recriminations further down the line. It is really important that everyone is heard and I wanted to talk to her three sons and her parents.

“It never is as simple as the person having a donor card. It is such an emotive issue and you are being asked to make such important decisions when you are at the very lowest point of your life.”

Nick, who worked here for 23 years, met Jo at work when he was a nurse in the Fracture Clinic and Jo joined the Admin team.

“I was smitten straight away with this lovely, bubbly, blonde woman with her incredible big eyes and whose smile lit up a room.” He eventually asked her out, which she declined, however at a work event they hit it off and “from then on we were inseparable,” he said.

Jo proposed to Nick in the grounds of Edinburgh Castle while they were holidaying with friends Just 10 days after their third anniversary, Jo, who had always kept herself fit and health, mentioned a headache.

In the morning Nick did as he always did – kissed her goodbye, told her he loved her and left for work. His day came to a sudden stop when he was called by the hospital and told to come.

Jo had been found collapsed in her car in the Park & Ride car park. She was rushed to hospital and placed on a ventilator in the Intensive Care Unit.

“They did all they could for her,” said Nick. “The team was superb – the care they gave to both of us was fantastic.”

He was approached by the Specialist Nurses for Organ Donation asking if organ donation was a consideration and then had the discussions with his and Jo’s family.

He has since had a poignant letter from the patient who received Jo’s heart describing how her selfless gift gave her a second life – one in which she was able to contemplate marriage.

Her wedding favours included forget-me-not seeds which are the flower for the Organ Donor Network – a support network for families of those who have gone on to donate.

Nick said: “It is a letter I have read many, many times. You cannot find meaning in sudden death, but you can have solace in the knowledge that such a selfless gift means so much to so many people.”

Lucy Hornby wears her organ donation badge and “my dad is a super hero” t-shirt with pride.

The ten-year-old and her family are urging others to join the NHS Organ Donor Register and discuss their wishes with their loved ones as part of Organ Donation Week.

Cyclist Andy Hornby, 50, was training for a triathlon when he was involved in a serious collision in May this year.

Despite the best efforts of ambulance, East Anglian Air Ambulance medics and our staff, Andy’s injuries were so severe that a joint decision was made by doctors and his family to withdraw treatment.

The amateur triathlete has been able to donate his kidneys, liver, heart valves, eyes, bone and his tendons following his death, which has been a great source of comfort to his family.

Lucy said: “My daddy was very special to me. He was always very fun and treated me to pizza every Thursday. We liked to do bike rides together and during lockdown we did a photography challenge together, which was really fun.

“It is definitely very important to sign-up and definitely something you should consider, even if you never get a chance to donate your organs. Both of his kidneys have been used for two people who had been on the waiting list for three to four years and I am very happy for them. I’m happy because it means other families do not have to think about their loved ones dying early and can live their lives for as long as possible.”

Charlotte Hornby, who works as an Ultrasound Deputy Operations Manager here, said her husband would have wanted to help others and had joined the organ donor register 20 years ago.

“Despite his life coming to the most horrible and abrupt end, it was a really easy decision to help other people and give the gift of life. The grief of losing somebody for any reason is absolutely horrible. Knowing he has gone to help at least two people who have now been able to come off dialysis makes it a tiny bit easier.

“We did not expect Andy’s life to come to a sudden end, but I am so grateful that we had that conversation because it made it easier and I could not think of a reason to say no. To give the gift of life is one of the most precious things anyone can do.”

We’re marking the start of Organ Donation Week by paying tribute to everyone who has helped save the lives of others following their death.

In the last year, 29 families at our hospital have said yes to organ donation, with 19 patients going on to donate following their death. This has allowed 56 organs to be donated to those waiting a life-saving transplant.

Prof Erika Denton, Medical Director, said: “We are always grateful to the families and loved ones of donors who, at the most challenging of times, and with immense generosity, give another family a new chance at life.”

This year we’re marking the week with a number of events, including the lighting up of city landmarks such as Norwich Cathedral, Norwich Castle, City Hall, the Norwich Ski Slope as well as the hospital itself.

They’ll be lit at a special event this evening, when we’ll be joined at the Forum by donor families, the Lord Mayor of Norwich and dancers and singers. The event, organised by the Specialist Nurses for Organ Donation, will signal the start of a week to raise awareness of the importance of talking to family members about your wishes.

Deborah Easby, Clinical Lead for Organ Donation, said: “While most people agree that it’s important to talk to their family about organ donation, it’s less likely that they will have actually had this conversation. Please let your family know your wishes, it will make it much easier for families if there comes a time when organ donation is a possibility.”

This is echoed by Nick Hext, whose wife Jo, who was a member of the admin team here, died in 2018 after suffering a bleed on her brain.

Nick, a former nurse of 23 years standing and an organ recipient himself, said: “I knew it was important to Jo, but this had to be a family decision. I didn’t want any recriminations further down the line. It is really important that everyone is heard and I wanted to talk to her three sons and her parents.

“It never is as simple as the person having a donor card. It is such an emotive issue and you are being asked to make such important decisions when you are at the very lowest point of your life.”