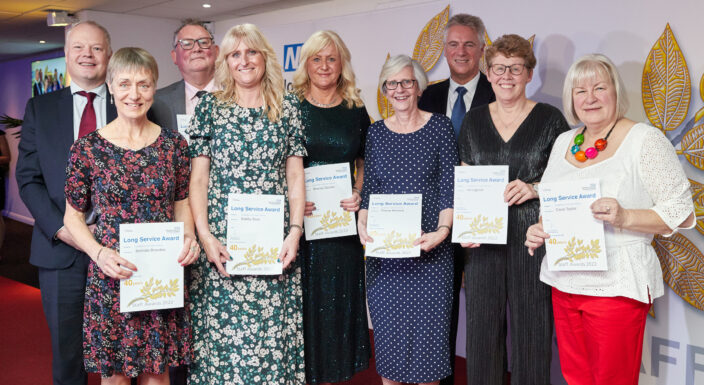 The outstanding work of colleagues working across our hospitals has been celebrated at the annual Staff Awards 2022. These awards took place in person for the first time in two years at the Norwich City Football Club on Thursday 17 November. 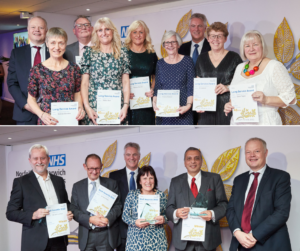 Nearly 600 nominations for our teams and colleagues were made for this year’s Staff Awards scheme, which included entries from patients and families for the Patient Choice awards.

Tom Spink, NNUH Interim Chair, said: “We are very proud of our excellent individuals and teams at our hospitals and are delighted to recognise those who “go the extra mile” to help patients and colleagues, along with those who have given so much of their lives to our hospitals and to the NHS.”

In celebration of the 250th anniversary of the N&N Hospital, there were some additional awards, including a Special Award for Innovation for the Virtual Ward team.

This team introduced a completely new way of working through virtual nursing across the Trust and saving 7400 bed days over the last 12 months.

Midwife Davina Bowen won the individual Patient Choice award after being nominated by a patient following the care she received from Davina during the delivery of her stillborn baby.

The patient said: “Davina went above and beyond her duty of care for all of my family, she supported us through the worst days of our lives and made me feel safe when I needed it most.  She even came in, in her own time to help arrange casts of my son’s hands and feet before we said our goodbyes to him, what she did for us was more than just a job, she gave her heart to us and she will stay in ours forever.” 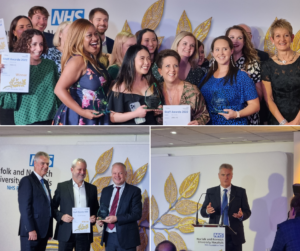 Gissing Ward received the Patient Choice team award after being praised by a patient and his wife for the outstanding care they both received.

The nominator said of the team: “Nothing has been too much trouble despite the predominantly challenging, distressing, stressful situation we found ourselves in. This includes allowing me to stay overnight with him, arranging carers passports, endless cups of tea, lending an ear, reassurance, liaising with medical teams and most importantly caring about him and his recovery.”

This year’s Edith Cavell Award for outstanding leadership went to Helen Copsey, MND Care Network Coordinator who has transformed the care of patients with Motor Neurone Disease in Norfolk.

See some of the pictures posted by colleagues during the night on our interactive social wall.

View our full album of photos from the night.