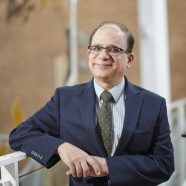 Professional profile:Mr Ashish Minocha graduated in Medicine from King George’s Medical College (KGMC), Lucknow, India in 1986. Since his early days as medical student, he was passionate to pursue a career in Surgery and to work for benefit of children. He went on to complete his post-graduation in Surgery (M.S.) in 1990 from the same institution (KGMC) and then successfully completed sub-speciality training and higher degree in Paediatric & Neonatal Surgery (M.Ch) from All India Institute of Medical Sciences, New Delhi, India, in 1995.

He joined NHS in 1996 as a Registrar in Sheffield Children’s Hospital and went on to become Senior Registrar at Great Ormond Street Hospital in 1997. He was a Lecturer in Neonatal Surgery at St Mary’s Hospital and University of Manchester between 1999- 2000.   During this period, he was influenced greatly with the simplistic but creative surgical approach of Dennis Brown Award Winner Mr Adrian Bianchi, whose guidance sculpted Ashish’s surgical techniques, clinical management style and training aptitude.  Ashish continues to share these techniques with his peers and younger generations of Paediatric Surgeons worldwide.

From 2000 onwards, he worked as Consultant in Hammersmith, Chelsea & Westminster, Royal Brompton and St Mary’s Hospital in London as well as Queen’s Medical Centre in Nottingham, before moving to Norwich in Dec 2001. He specialises in laparoscopic and endoscopic surgical treatment for gastrointestinal conditions of newborns babies and children. Other special interests include Paediatric Thoracic / Thoracoscopic surgery and management of undescended and impalpable testes. He is the Lead for Restrictive Lingual Frenulum & Lactation Support Service at NNUH, which is nationally recognised and is at the forefront of current national multicentre randomised control trial (FROSTTIE).

He considers himself very lucky to have a wide experience of working in both East and West. This gives him an edge and a good understanding of contrasting work ethics, different leadership styles and wide variety of management cultures. He believes that a lot can be achieved by learning from these differences.

He has contributed hugely to regional, national and international conferences and workshops, has a significant numbers of scientific presentations, invited guest lectures, publications in peer reviewed journals and Book Chapters to his credit. He has also credited with organisation of many national and international workshops and academic meetings.

Personal profile: Outside his professional life, he loves travelling and is an amateur music enthusiast – enjoys singing, and attempt to play a few musical instruments and even composing music!  He has some basic level skills in swimming, skiing and ice skating