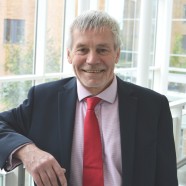 Julian is a chartered accountant and corporate treasurer. He was Executive Finance Director of Broadland Housing Association until 2019 and has held four senior finance director roles in growing housing association groups in the Eastern region over the last 20 years.

After graduating from Trinity College, Oxford, Julian worked in investment banking until moving to the social housing sector.

Julian is the nominated Non-Executive Director for Emergency Preparedness and Digital Cyber Security as well as being Chair of the Audit Committee and a member of the following additional committees: