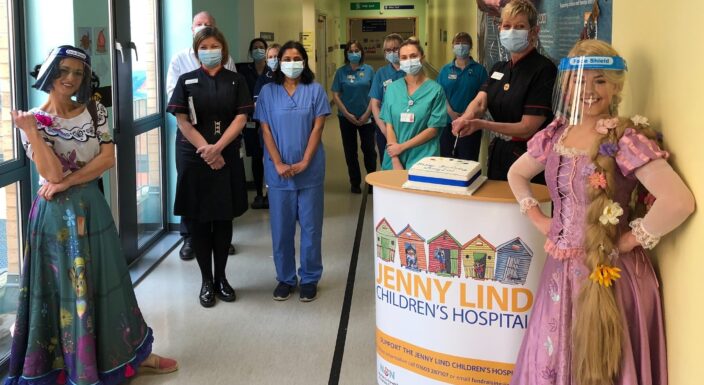 The Jenny Lind Children’s Hospital celebrates 168 years of caring for local families on 3rd April 2022.  Founded in 1854 with monies raised by Swedish Opera Singer Jenny Lind, known as the Swedish Nightingale, the hospital treats over 60,000 patients every year from across East Anglia.

In 1975, the children’s hospital became part of the Norfolk and Norwich Hospital and today it provides a wide range of services including cancer care, children’s surgery, treatments for diabetes, respiratory illnesses, allergies, urinary and bowel conditions, plus care for sick and premature babies.

Sam Higginson, chief executive of the Norfolk and Norwich University Hospitals NHS Foundation Trust which includes the children’s hospital, said:  “I’m delighted to be joining the children, parents and staff today in celebrating this anniversary.  We have treated over 4 million children since the Jenny Lind opened in 1854. Today, the children’s hospital is going from strength to strength with the two new paediatric theatres opening in later this year.”

A podcast detailing the story of the Jenny Lind Children’s Hospital and the role played by opera singer Jenny Lind is being released for the anniversary, along with a new portrait of Jenny Lind composed of staff selfies, which will be on display in the hospital.  A history book by author Bruce Lindsay is also being brought up to date and sold to raise money for the Norfolk & Norwich Hospitals Charity which benefits the children’s hospital.

Podcast storyteller Mr Richard England, consultant paediatric surgeon, says:  “Our hospital has supported generations of children and their families.  We are immensely proud of our history, as the second children’s hospital to be established in the country.

On the anniversary day, the children and staff on Buxton Ward will be celebrating with cake, games and balloons, plus entertainment from AB Enchanted.