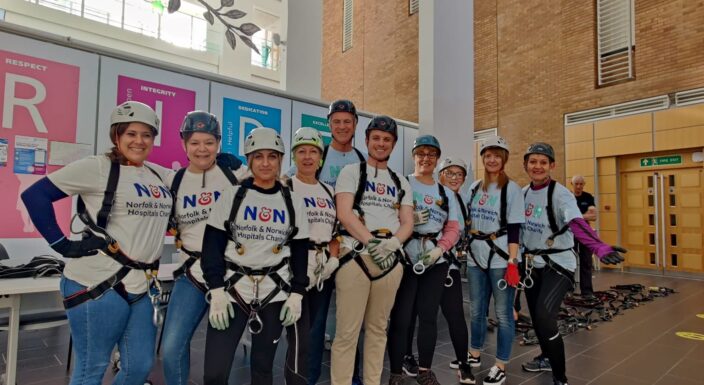 Sixty brave fundraisers have reached new heights to raise money for the N&N Hospitals Charity by abseiling from the top of the hospital.

Staff and hospital supporters took on the challenge at the weekend, which started 40ft up on the fourth floor of the East Atrium.

Dave Talbot, from Adventure Events, provided full training and calmed the nerves before the abseilers made their descent.

Lynn Crombie, from the N&N Hospitals Charity said: “With donations and sponsorship still coming in, a final figure has yet to be confirmed but we expect that the event will have raised at least £7,000 which will benefit staff and patients at the N&N.

“We’d like to thank everyone who took part, came along and supported their friends and colleagues and donated to our charity.”

Visit our website https://nnhospitalscharity.org.uk/ for more information about the hospital charity.