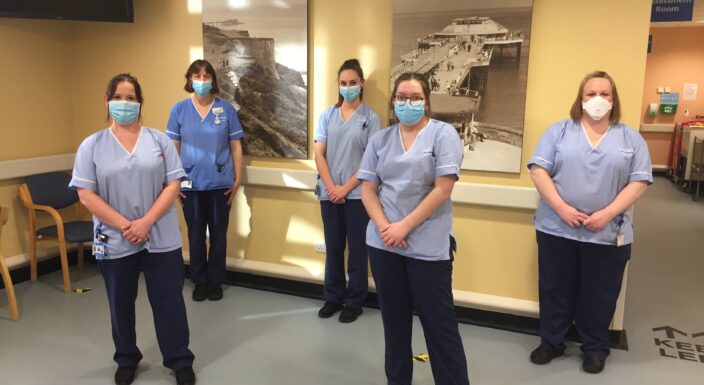 Thanks to NNUH Specialist Children’s Diabetes Nurses and the Cromer outpatient team, families living in and around Cromer will no longer have to travel to Norwich for one of their routine condition check appointments.

As well as an annual check-up, children with diabetes have to have their overall glucose levels checked every three months. Until recently this involved up to a 50-mile round trip for some families from the coastal town, and surrounding area, to NNUH for the test, which takes only a few minutes.

The face to face test has always been carried out by NNUH health care assistants (HCAs) in a routine clinic appointment but because of the Covid-19 pandemic that in-person contact was reduced. A drive through service was created at NNUH so that children could extend their arm out of their car window, have the finger-prick test and wait for confirmation of a result.

Senior Paediatric Diabetes Specialist Nurse, Suzanne Lee, wanted to set up a local service out of Cromer Hospital, so has developed a similar service there too. Training was arranged by the NNUH diabetes nurses to enable the clinic to be run by the outpatient nurses in Cromer.

Suzanne said: “We wanted to create a local service similar to that which we were running at the N&N. We did the training four months ago and made sure it was embedded and that staff were fully confident in running a clinic so the Cromer team can run this independently.”

Since then the team has run three clinics. Suzanne said: “I am really pleased with how teams from both hospitals have worked so well together to set up this service. This really is so much better for our patients in North Norfolk.”

Mum of two, Heidi Skillen, from Cromer, has benefited from the clinics now working out of her local hospital. Before and during the pandemic she would have to take her daughter Ava, 12, out of Cromer Academy, for the majority of the day to take her to NNUH for her check-ups – a situation Ava found stressful. Heidi also has a nine-year-old son, Harry, who needed to make the journey as well as he could not be left with anyone during lockdown.

Heidi said: “This has been great for me. I am a single parent and it is so much easier to go to Cromer Hospital. I don’t have that hour round trip, parking issues and I can take Harry with me. He can sit in the car with a phone, so he can call me if there are any problems.”