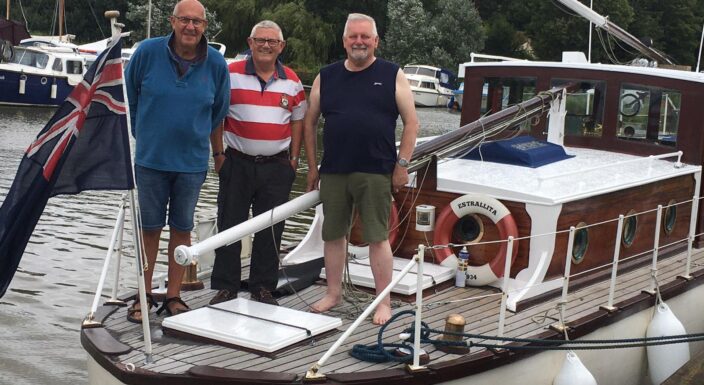 A motor yacht used in 1940 to rescue British soldiers at Dunkirk is preparing to set off on a new mission to raise money for two charities.

The yacht Estrallita is owned by Tony Billson, from Diss, who spent five years painstakingly restoring her and researching her history.

Next month, Royal Navy veterans Tony, Tommy Morrison and Michael (Jack) Hawkins, who served on HMS Bulwark in the 1970s, will set off from Lowestoft, taking in ports along their journey to Poole.

Members of the public will be invited to come on board and learn more about the history of the ‘Little Ship’ and donations can be made which will support the Jenny Lind Children’s Hospital where Tony’s daughter, Rachel Chaudhary works, and the armed forces charity SSAFA.

Tony found the Estrallita in a poor state of repair in Ramsgate, with no idea about her history, which included tragedy, celebrity, name changes and a commendable wartime record in Poole. The journey next month will include a Dunkirk plaque-laying ceremony taking place in Portsmouth and a trip up the Thames to take part in the 40-year Falklands War commemorations. Between 1940 and 1945 the Estrallita was used by the Royal Navy as a harbour patrol boat in Poole, defending against invasion and to rescue downed pilots in the English Channel.

Tony said: “Last year, we took her out for the first time and sailed to Ramsgate so now we are aiming to go even further, raising as much money as possible for the two charities.”

During his research, Tony discovered Estrallita had operated as a Harbour Patrol vessel at Poole during the Second World War.

Her duties were to protect the harbour channels, and specifically to block the channels if there was an invasion by sinking designated Block Ships or as a last resort to sacrifice herself to delay any advance. Estrallita was one of six vessels deployed for this purpose but was the only one that was retained throughout the war.

In 1960s the vessel was owned by Hughie Green as a place to stay during the summer season going from resort to resort and it was on one of these excursions from Shoreham to Morecombe that Green became involved in a rescue off the coast of Cornwall after spotting red flares at sea.

No other ship responded to the call for help, believing the flares to be regular RAF flares which were regularly used. Green successfully campaigned for red flares to only be used at sea in distress which is the case today.

Lynn Crombie, NNUH Fundraising Co-ordinator said: “It is fantastic that a little boat with such a colourful history which has saved lives is now going to heling to raise money to improve the lives of our young patients at the Jenny Lind. We wish Tony and his crew a safe time at sea as they embark on this wonderful coastal journey.”

You can make a donation to the Jenny Lind Children’s Hospital via the JustGiving page http://www.justgiving.com/estrallita

For more information about the N&N Hospitals Charity, go to https://nnhospitalscharity.org.uk/