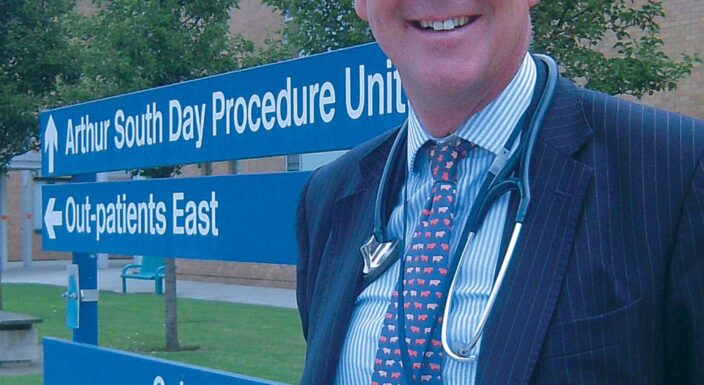 Dr Brooksby, aged 76, retired in March 2009 having spent a decade as Medical Director at NNUH at a time when the hospital moved from the old site on St Stephen’s in Norwich to the new location at Colney Lane in 2001, becoming a teaching hospital in 2002.

Professor Erika Denton, NNUH Medical Director, paid tribute to Dr Brooksby. She said: “Iain’s leadership was fundamental in taking forward these developments and we are indebted to him for his outstanding commitment to this Trust and for steering us through a period of significant change in our history.

“Many thousands of patients have benefitted from Iain’s dedication and skill over more than 30 years as a cardiologist. In the office he was known as ‘Dr B’ and will be remembered with love and affection.”

Iain’s wife Sarah says: “Post retirement, Iain kept a busy schedule. He retained his involvement with Marie Curie, the Norfolk Heart Trust and the Norwich Consolidated Charities. He also spent some time working as a locum for clinics at the James Paget hospital and advised on medical tribunals.

“A devoted family man, Iain enjoyed his children’s visits and holidays to Norfolk. As a long-time member of the Royal West Norfolk Golf club he was thrilled when his son Angus was elected as a Member this Summer.

“Iain enjoyed the Royal Opera House or Glyndebourne and was an avid supporter of English rugby. Iain maintained his interest in all country sports and was mostly to be found outdoors. His passion was his two donkeys which he owned until a recent house move.

“Iain’s cancer diagnosis in 2018 was a cruel intrusion into his post-retirement enjoyment, but he bore it with typical bravery and dignity and remained reasonably active up until the end.”

Professor Denton added: “Iain was an exceptional doctor, cardiologist and colleague as well as a friend to many of us.”

A private family funeral will be held shortly and a Service of Thanksgiving is planned to be held in the Summer of 2022.