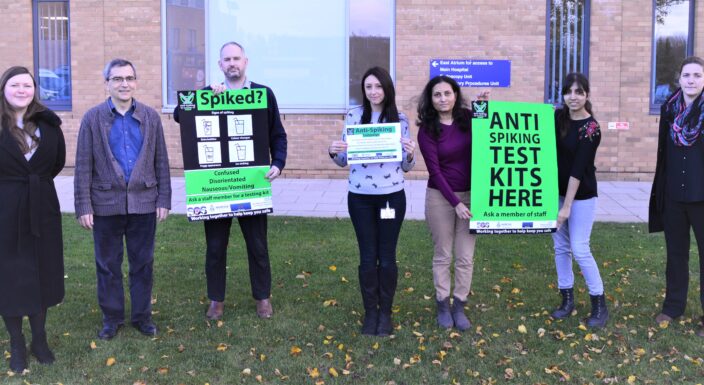 An Anti-Spiking Campaign pilot launched by NNUH Specialist Biomedical Scientist Michelle Frost has been hailed a success and is set to be rolled our further across the region, and possibly nationally.

Michelle said the pilot exceeded all expectations with the number of reported spiking incidents going from an all-time high to being greatly reduced since the implementation of the campaign last December.

The high-profile campaign saw the NNUH lab team join forces with the Police, the SOS wellbeing bus, and selected clubs and bars to offer anti-spiking kits, so anyone who thinks they, or a friend, has been spiked, can ask at the bar for a kit to provide a urine sample, which is submitted to the NNUH lab for testing.

All samples were anonymous at the point of collection, and tested for substances connected with spiking, with results sent out via encrypted barcodes linked to the sample to reduce reporting barriers. People can request their results by giving basic personal data and then find out if they have been spiked and if so with what substances.

It is believed that the spiking of drinks – adding drugs or substances to a person’s drink – or injecting them without their prior knowledge or agreement, has become more prevalent across the country, with a number of incidents reported in Norwich.

The Biomedical Science team gathered data on how prevalent the problem was, as well as supporting emergency and urgent health care workers to treat people more effectively and support them when they feared they may have fallen victim to this activity. 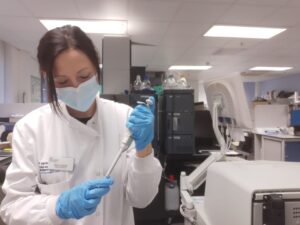 Michelle said: “The pilot has exceeded expectations. Pre-pilot reported spiking incidents were at an all-time high, but since the implementation of the campaign, reports in incidents have dropped. This is great for public reassurance, and it may mean those performing the acts of spiking have been deterred.

“As the campaign provides a way for people to access a comprehensive drug screening service and everyone can easily have access to a kit who requires one, it was originally expected that initial reports would increase, but we did not see this. It has been very reassuring to see that fewer people in Norwich have potentially been spiked as compared to pre-campaign figures. Compared to other areas, Norwich is now reporting fewer suspected spiking incidents in relation to previous reports.”

“The scheme is developed for anyone who wants to find out if they have been spiked, and if so, what substance was used against them, which is a massive development to what has previously been offered. This shows we take every potential spiking incident seriously, to help keep people safe, and have designed it to try and reduce as many reporting barriers as we can to find the true prevalence.”

Michelle is now in the process of finalising additional funding which will help move the campaign on, as well as helping to raise awareness of the service.

“As this is a unique service, we are only starting to grasp the true prevalence, but all data we gain will help us to build a true picture of the actual prevalence and compounds in use. We have designed the kits to reduce all reporting barriers, as far as we can, which helps with the reporting of cases.”

Norfolk Constabulary Chief Inspector Ed Brown said: “We are in full support of this brilliant initiative and are pleased to see this will be extended across the county.

“We have seen just how successful this innovative pilot scheme has been in Norwich, and the reassurance it has given to those who not only believe they may have been spiked, but to those who may be anxious about going out in the night-time economy.

“We continue to work with pubs, clubs and bars to raise awareness of these types of incidents and what actions to take when a member of the public feels that they may have been spiked.

“We would always encourage victims to report the matter to police. Those who believe they have been spiked can take action, in the first instance, by using one of these kits”