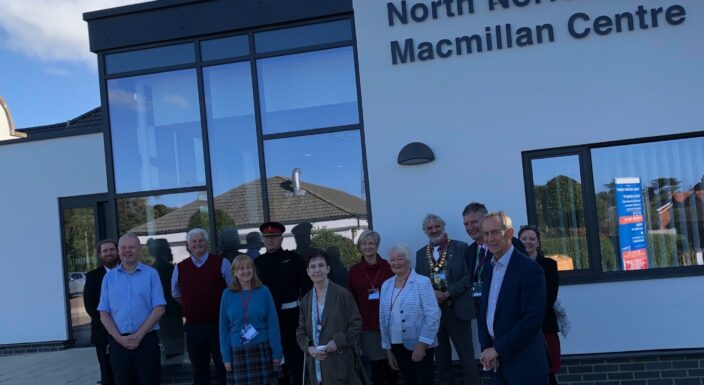 A ground-breaking £4.85million cancer centre which will bring treatment and support services closer to home for thousands of people has officially opened

The North Norfolk Macmillan Centre at Cromer and District Hospital has been built as part of the local healthcare trust’s response to predictions that demand for local cancer services could increase by more than 200 per cent over ten years.

Even without the prospect of rising demand, there had long been a case for slashing travel time for people who were often making tiring and time-consuming journeys to Norwich to receive specialist care.

There was much cause for celebration then, when local dignitaries and senior representatives of the Norfolk and Norwich University Hospitals NHS Foundation Trust (NNUH) and Macmillan Cancer Support descended on the state-of-the-art centre for a small, official opening ceremony, ahead of a community open day for the public on Saturday 16th October.

Attendees learnt how the new centre would transform the provision of cancer care in the region, with three new clinic rooms and two minor procedure rooms allowing Cromer Hospital to offer an additional 10,000 outpatient appointments annually as well as more space for cancer diagnostics.

The positive effect of these new facilities will be felt across the patient community at Cromer, as more space is freed up in the main hospital for clinical teams to deliver an extra 600 surgical procedures in dermatology, urology, vascular surgery and pain management.

The centre, which features original murals by award-winning local artist Eloise O’Hare, was designed to feel less clinical than a traditional hospital environment to emphasise its function as a multipurpose, welcoming space where patients can relax, talk to others in a similar situation and take advantage of the non-medical support and advice provided by the onsite Macmillan Information and Support Centre.

Patients receiving cancer treatment in one of the centre’s five new chemotherapy chairs for example – which have capacity to treat up to 30 people a day – can sit in the garden-courtyard at the heart of the unit, taking in the murals and plants whilst they wait for their appointment.

The transformation of the former Davison Unit, which once housed a children’s ward, represents a new era in cancer care for a historically self-sufficient, community hospital that has traditionally relied on the skills of highly trained nurses to treat people close to home.

Its staff are overseen by a Matron, Anita Martins, who has been closely involved in the development of the centre, whilst the new Acute Oncology Service it hosts is delivered entirely by specialist nurses who can assess and treat less complex symptoms and side effects of cancer and its treatment.

Funding for the centre, which was designed by LSI Architects, was provided jointly by Macmillan Cancer Support (£2.2m), the Norfolk & Norwich Hospitals Charity (£1.8m) and the Norfolk and Norwich University Hospitals NHS Foundation Trust, whilst a donation of £600,000 from the Cromer Community & Hospital Friends has been used to purchase equipment.

Sam Higginson, NNUH Chief Executive, says: “We’d like to say thank you to our charity partners and the local community for all the support we have received in making this cancer centre come to fruition in the teeth of a pandemic. It’s a remarkable achievement by all concerned and will benefit patients in North Norfolk for years to come.”

“We would also like to thank the family of Douglas de Bootman. Mr de Bootman left £1m in his estate to the N&N Hospitals Charity and to mark his generous donation we have plans to develop the garden area behind the centre which will become the de Bootman Garden.”

John Paul Garside, Norfolk and Norwich Charity Director, said ‘When we started working on this project we wanted to ensure that the monies donated by the public to the charity went to build something we could all be proud of, and where local people would be able to received their cancer treatment closer to home.

“What is unique about the new centre is that within the environment of treating cancer, you have the supportive care of our staff at Cromer & District Hospital. The N&N Hospitals Charity is very proud to have played a major role in making this centre a reality and making a difference to the people of North Norfolk. We have enjoyed working with our charity partners Macmillan Cancer Support and the Cromer & District Community Friends. Finally we would like to say thank you to all our supporters who have given in some way and helped us reach this day.”

Emma Tingley, Head of Partnerships, Macmillan Cancer Support in the East of England said:  “Everyone, regardless of who and where they are, deserves access to high quality, personalised care that addresses their practical and emotional needs, as well as their cancer. This shouldn’t come at a cost or make their life any harder than cancer has already made it, but for people living in rural communities like North Norfolk this has unfortunately been the case – until now.

“The opening of the North Norfolk Macmillan Centre means there is no longer a need to set aside time and money for regular journeys to Norwich, nor is there any shortage of the practical, emotional and financial support that people need close at hand to navigate the chaos of a cancer diagnosis.

“Collaborating with local partners like NNUH ensures we can use our resources and expertise to create and improve cancer services that will cater directly for the needs of the local population. That wouldn’t be possible without the generosity of our supporters however, whose donations account for 98% of our income, and therefore around £2.16m of the funds we’ve put towards this centre.”

Former cancer patient Alison Hamilton, from Bacton, said:  “My late partner Peter was fortunate to receive excellent care and treatment at Cromer Hospital during the final years of his life, when he was living with a type of terminal blood cancer, but for many people – us included – the limited cancer services at Cromer Hospital meant it wasn’t always possible to have all the tests, surgery and treatment we needed so close to home.

“At one point we were both living with cancer and having to make countless round trips to Norwich for care, which was exhausting and only added to the stress that came with having a life-threatening illness. It affected our quality of life, but we didn’t have a choice if we wanted to give ourselves the best chance of recovery or living longer.

“Now, people who find themselves in the same position I did, whether as a carer or a patient, know they have a centre nearby where they can go for their check-ups, tests, treatments and minor procedures, and at the same time seek expert advice and support. Having all of that under one roof, and in such a nice environment, is more than a small blessing for local people living with cancer.”