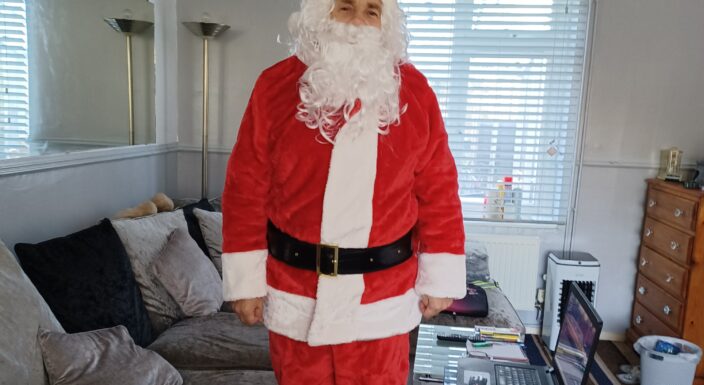 A £1m N&N Hospitals Charity appeal to help create an innovative orthopaedic elective centre has received a festive boost from an employee at Sainsbury’s in Longwater, Norwich.

Simon Game was just 50 when he underwent hip surgery after crippling arthritis had left him in unbearable pain.

Now, Simon is backing the plan to create the Norfolk and Norwich Orthopaedic Centre (NANOC) which will carry out around 2,500 orthopaedic cases a year for patients who need ankle, foot, hip, knee or shoulder operations.

The £11.4m centre will see the N&N Hospitals Charity investing £2m for equipment, £1m of which has already been raised.

From December 1-24, Simon, who works as a personal shopper in the Longwater store, will be doing his role on the shop floor dressed as Santa Claus, while the store itself will have charity buckets and information about the appeal on each of its tills.

Simon said: “I waited 18 months for my new hip and the pain was horrendous at times. I had trouble walking, needed to use crutches or a frame to get around, and I often needed to sit down.

“Just eight weeks after the operation, I was back at work and leading a normal life. I want to support the appeal because I know, first hand, the difference this has made to me and I am so grateful to the management and colleagues at Sainsbury’s Longwater for also supporting this.

“The store welcomes 40,000 shoppers a week so we hope everyone will get behind us.”

Simon’s fundraising begins on December 1 when he will be arriving at work in style, courtesy of JJ Limousines who are waiving their £170 fee to transport Santa Simon.

Jim Wimhurst, NNUH Consultant Orthopaedic Surgeon, said: “To have support  like this from Simon and the team at Sainsbury’s Longwater is wonderful news and is a fantastic example of the community getting behind us.

“Hearing what a difference hip surgery has made to Simon’s day-to-day life emphasises how important the new Norfolk & Norwich Orthopaedic Centre (NANOC) will be to the people of Norfolk. We thank Sainsbury’s for backing our NANOC appeal during December and we hope Santa Simon puts a smile on shoppers’ faces.”

You can support the NANOC appeal and fund out more here https://www.justgiving.com/campaign/NANOC