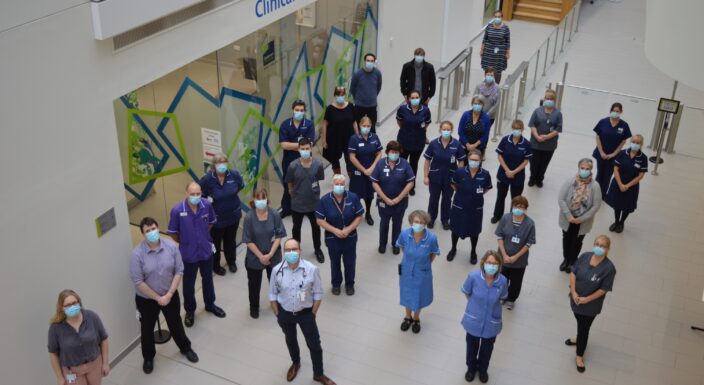 One of the most high profile and fast-paced research studies at NNUH has come to a conclusion with hundreds of Norfolk volunteers playing a role in Covid-19 vaccine research.

The Novavax vaccine clinical trial began at the Clinical Research Facility (CRF) at the Quadram Institute in October 2020 with more than 500 participants taking part in the year-long study. Participants came from the local community, NHS and Norwich Research Park and made several visits to the CRF over the last 12 months.

The final follow-up appointments have taken place for participants on the trial, which has involved the whole research delivery team from NNUH with support from colleagues at neighbouring hospital trusts, primary care and the National Institute for Health Research (NIHR).  Without the CRF and support from the NIHR Clinical Research Network it would not have been possible for NNUH to have taken part in a trial of this scale.

Novavax reported earlier this year that the vaccine tested in this Phase 3 trial, which involved 15,000 volunteers in the UK, has been 89.3% effective, and has been submitted to UK regulators for conditional marketing authorisation. The protein-based jab – similar to those used to protect us from flu – and can be stored at fridge temperature making it easier to transport and store than mRNA-based vaccines.

Prof Jeremy Turner, NNUH Consultant Endocrinologist and Clinical Director for the NIHR Clinical Research Network in the East, said the trial was set up at an unprecedented pace and scale and the results have surpassed expectations.

“We are extremely grateful to all the participants who took part in this study and it is has been a huge team effort by colleagues across Norfolk. The pandemic unified our passion to do something about it and there was shared endeavour across the local health economy. Being involved in research leads to real change in people’s healthcare in the near future and the timeframe can be years – this time it is a number of months.”

“Clinical trials may never go back to how they were because there’s been such a mass participation exercise among the population and people have seen what it’s like to be involved in a clinical trial and the difference it has made.

We need to harness that for other research and show the impact that taking part in research can have.”

You can find out more about research happening locally by visiting bepartofresearch.uk.