Role of N&N Hospital in WWI and WWII 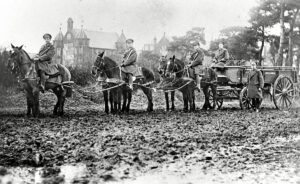 1914-1918 – Ninety seven convoys from overseas were admitted to the hospital, totalling 7880 men. Five members of the honorary medical staff served in the Royal Army Medical Corps and 29 nurses joined the Naval and Army Nursing Services. A total of £23,365 was donated by the public to provide and maintain beds for soldiers.

8 August 1914 – Reported to the board that beds had been offered to the Naval Medical Services if needed – 50 beds now, 50 more at the end of the week and 150 in marquees in the grounds if needed. Offer for 100 beds accepted but would only be used if Great Yarmouth hospital was unable to deal with those admitted there.

1914– within days of the outbreak of war four sisters, four nurses and two medical officers resigned to join up. Dr Burton-Fanning and Mr Balance were called up by the 1st Eastern General territorial hospital in Cambridge.

5 September 1914 – letter received from Navy to say that beds were unlikely to be needed. The Hospital Board offered the 100 beds to the War Office to use as needed.

17 October 1914 – first convoy of 97 men arrived for treatment from France. At the time there was only one horse-drawn ambulance so transport of soldiers from the railway station to the hospital had to be arranged with support from the British Red Cross and the Order of St John.

November 1914 – a special ward for soldiers was suggested and the EDP launched a campaign to raise funds for this purpose. There were 720 donations received totalling £2,637.

January 1915 – a scheme was set up for people to subscribe for the maintenance of the military beds. Subscribers paid £5 per month for a bed in their name.

March 1918 – N&N recognised as a treatment centre for discharged soldiers by Ministry of Pensions.

1919 – Sixty beds allocated to treat discharged soldiers. There was also an increased uptake of outpatient services including massage, electrotherapeutics and rehabilitation.

November 1935 -Government asked N&N and Jenny Lind Hospital to consider arrangements for air-raid casualties. A committee set up to investigate this.

May 1936 – visit from a Home Office Medical Officer who arranged training on effects and treatment for different forms of gas.

September 1936 – Hospital Air Raid Precautions Committee presented a report to the Hospital Board on hospital services in the event of a war which made recommendations on actions to be taken in preparation.

March 1937 – plan approved to arrange for four Public Assistance Institutions to be set up in Aylsham, Gressenhall, Pulham Market and Thetford to treat air raid casualties across the county. A “mobile unit” made up of four honorary medical staff, two resident medical officers and 24 nurses would be created to visit these institutions as needed to deal with the most severe cases.

May 1938 – Medical Officer of Health asked that the outpatient department be converted into a First Aid Post.

January 1939 – staff recommended the organisation of a blood transfusion unit to treat injuries. 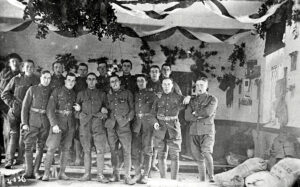 April 1939 -plans for three semi-underground shelters to be built in hospital grounds and two emergency operating theatres with their own lighting in the basement under the casualty room.

1939-1945 -services provided to the American Air Force as well as some German prisoners.

9 September 1940 – hospital ordered to evacuate all patients who could be moved due to likelihood of an imminent attack. By 10 September only 45 patients remained. The hospital could not return to full quota of patients until November 1940.

18 February 1941 – Nineteen patients sent to NNUH because of air raid, 11 admitted and two dead on arrival. Windows in the hospital were damaged in the raid.

27 April 1942 – Two-hour air raid on city with over 50 tons of bombs dropped. Patients moved from top floors of hospital to the basements. Eight seven patients admitted and 95 out-patient casualties received because of the raid. Considerable damage received to parts of the hospital.

28 April 1942 – repair work started on hospital. 237 patients transferred to other local hospitals or home. A further 21 were transferred the next day.

29 April 1942 – another heavy raid with 25 casualties admitted but no further could be received as fires on St Stephens Street prevented access to the hospital. Patients diverted to Woodlands Hospital in Bowthorpe Road. NNUH experienced loss of electricity and phone lines for several hours. There were only 90 patients in the hospital, and these were transferred to the basement by the nursing staff. Hospital further damaged and many of the repairs that had been made were immediately undone.

27 June 1942 – N&N hit by bombs with 120 beds out of commission. Eighty nurses and maids became homeless as the Leicester Nursing Home caught fire. Main operating theatre and linen room were destroyed. Roofs of Wards 3 and 4 were burnt, and wards 1 and 2 were damaged. Account from Dr Cleveland that “In the early hours of the morning the hospital grounds presented a curious sight. All around on the lawns and paths were patients on mattresses among chairs, tables, office records, surgical instruments, nurses’ clothes, and everything that could be moved out of danger.”
August 1942 –the David Rice Memorial Wing of Hellesdon hospital was leased to the N&N for £1500 per year to accommodate patients whilst hospital was repaired. All the maternity cases were transferred to this ward, along with a further 50 beds allocated for surgical cases.

12 October 1942 – King George VI paid a surprise visit to Norwich to see how the city had been affected by air raids. This included an unofficial visit to the N&N to speak to staff and patients and inspect damaged buildings.

June 1944 – 28 members of nursing staff called to hospitals in South East England to prepare for intake of casualties from the invasion of France. These nurses returned to Norwich in July.