History Of The Jenny Lind

Norwich was only the second city in the country to have a children’s hospital (the first was London’s Great Ormond Street Hospital for Children in 1852). A Norwich infirmary for sick children admitted its first inpatients in April 3, 1854, thanks to the generosity and goodwill of a Swedish opera singer, Jenny Lind.

More than one hundred and fifty years later the Jenny Lind Children’s Hospital at the Norfolk and Norwich University Hospital continues to provide treatment and care for the county’s children.

Who was Jenny Lind?

Opera singer Jenny Lind, dubbed the “Swedish Nightingale”, was one of the best known and most popular entertainers in mid-19th century Europe.

In 1847 she gave her first concerts in Norwich and they proved so popular that a third concert was arranged. Jenny Lind returned to Norwich in 1849, staying with Bishop Stanley and she gave two concerts in St Andrew’s Hall on 22 and 23 January.

The money raised from the Jenny Lind concerts were later earmarked for the purpose of an infirmary for sick children. A public meeting in 1853 unanimously endorsed the idea and in 1854 the hospital opened in Pottergate, Norwich.

A history of the Jenny Lind

The establishment of The Jenny

On 3rd April 1854 The Jenny Lind Infirmary for Sick Children opened it’s doors for the first time. Situated on Pottergate in the centre of Norwich, the house had been bought with the proceeds of two concerts performed by Jenny Lind, the famous Swedish opera singer, in 1849. It was only after the Hospital for Sick Children in Great Ormond Street had opened that a committee was formed in Norwich to open a similar hospital for the dedicated benefit of children. Norwich became the second city in the UK to establish a Children’s Hospital.

You can hear more about the history of the Jenny Lind Children’s Hospital in two podcasts. 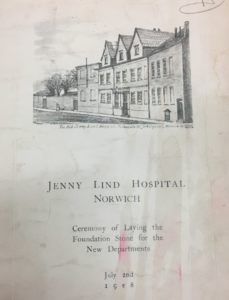 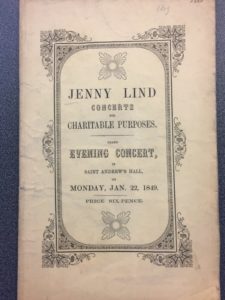 Programme for the 1849 charity concert

Jenny was born in 1820 amidst rather unfavourable circumstances. At birth she was sent away to live with distant relations but at the age of three her mother was forced to bring her back to live in Stockholm. It was Grandma however that discovered the young girl’s natural musical ability and encouraged her to sing and play the piano. By chance her naturally beautiful voice was heard by a passer-by with connections to the Royal Opera House. Eventually her mother was persuaded to let her study at the theatre school in Stockholm, the youngest student ever to be admitted at the age of nine years. She was very talented and rapidly rose to fame throughout Sweden, earning her nickname, ‘The Swedish Nightingale’. At the age of 17 she made her debut as lead in an opera, marking the beginning of her professional life. Tragically soon after, she lost her voice, almost ending her career and only with careful tuition in Paris did she recover.

Her fame spread across Europe, and eventually in 1847 she arrived in London to be greeted by almost hysterical acclaim. Her concerts in London all sold out as did her tours of the provincial cities. Jenny Lind’s arrival in Norwich was marked by crowds lining the streets, church bells ringing and gun salutes. Her welcome by the city was remembered as she returned only two years later with the distinct purpose of performing here for charity.

Following her famously successful American tour with PT Barnum, she returned to England, now married to Otto Goldschmidt a composer and pianist. They continued to support the Children’s Hospital that had been established in her name and visited Norwich twice more, recorded by their entries in the visitors book of the hospital. Successive generations of her family have also continued their support.

Jenny Lind wrote to the chair of the hospital management committee:

“Of all the money which God allowed me to give away when my poor throat could call an audience to listen to it’s production. None has borne a more nobler fruit than the Jenny Lind Hospital of Norwich.”

She remained famous throughout the 19th century not only for her extraordinary talent as a singer and actress, but also for her gentle, sincere and modest nature. Many of her concerts around the world were performed in aid of local charities and we remain deeply grateful for her generosity. 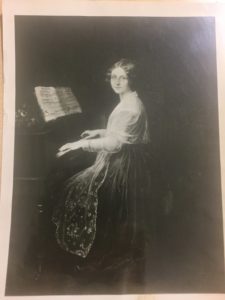 In it’s first full year of service The Jenny (as it was often known locally) admitted 51 patients and treated 275 outpatients. It’s premises were shared with The Lying in Charity for women in labour and shared a matron. Surgeons and Physicians attended from the Norfolk and Norwich Hospital.  From the annual reports it appears that surgical procedures were performed there from around 1865 when bladder stone extraction was recorded. The range of surgical procedures expanded rapidly from cleft lip repair, neonatal surgery, tumour excision, orthopaedic amputations and reconstructions to even neurosurgery!

Despite the range of medical conditions treated (before antibiotics) there was no resident doctor for the first 50 years and the nurses managed the patients very independently.

By the end of the 19th century, the original Pottergate building had fallen into disrepair. Mr Jeremiah Colman donated land at Unthank Road and an appeal was launched to build a new Jenny Lind Hospital for Children. The rather grand building was opened in 1900 by The Prince of Wales, later to become Edward VII. 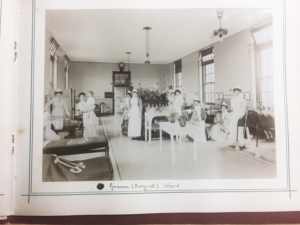 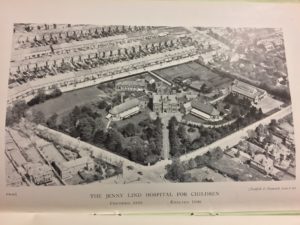 Visiting was encouraged to some extent in the early years as it gave the nurses chance to educate the families on the importance of good nutrition and the general care of children. Stricter regimens for visiting were brought in later on but thankfully were relaxed again from the 1940’s.

With the advent of the NHS in 1948 and shorter hospital stays, the standalone Children’s Hospital became less efficient and finally amalgamated with the Norfolk and Norwich Hospital in 1975. Recently in 2001 the Jenny Lind Children’s Hospital moved again with the N&N to Colney Lane where it now forms part of the West Wing of the building. We now see a combined total of more than 60,000 inpatients and outpatients each year. Along the course of our history of over 165 years we have treated more than 4 million children and young adults from across Norfolk, Suffolk and the far reaches of East Anglia.